5 Reasons Why Chambers Should Use Vertical Video 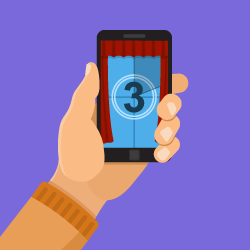 Smartphone use has disrupted the way we create and consume videos, but people love to hate vertical video – or do they?

Vertical video has become the new default, despite the fact that the human eye prefers a horizontal plane. The use of smartphones (along with social media) quickly disrupted this fact. According to Ooyala, 58% of video plays worldwide are shown on mobile devices.

Most people would agree that holding a smartphone in portrait mode is the most comfortable way to use it. Here are five reasons why your chamber should consider shooting videos vertically if you don’t already.

Simply put, it is a more compelling storytelling format.

Who is responsible for this shift?

Snapchat can take the credit for making vertical content popular -- first with photos, and then video – to post “Stories.” They forced users to film in portrait mode pushing it on millions of Millennials. It quickly became clear that vertical video is the preference on mobile, and other social media platforms have followed suit.

Instagram’s Stories also uses vertical video by default, and live-streaming tools like Facebook Live have adopted it as their default as well.

If you are worried about leaving desktop video viewers out in the cold, don’t be.  You can repurpose vertical videos turning them into square videos, which are actually a good fit for many social networks.

There are countless vertical videos on the internet that appeal to mobile users and generate millions of views. It’s an important shift that your chamber should be a part of.

If you aren’t sure where to start, try experimenting with your first vertical video by doing a “Behind the Scenes” shoot at your next event; you might be surprised how well viewers respond to the new organic feel your vertical videos create!