Winning Idea from the Chambers of Innovation Competition 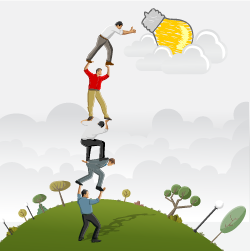 The Grand Prize Winner of the Chamber Innovation Awards was awarded $1500 and was featured in volume 3 of the idea book.

See all 5 award-winning chamber program and event ideas
in Chambers of Inspiration, Vol. 3.

In fall of 2015, the Saratoga County Chamber of Commerce in Saratoga Springs, NY convened a group of community members and asked them, “If you were given one extra day, what would you do with it?”

There was a range of ideas, but the responses all had one thing in common: something for others. Individuals shared ideas about things they would do for friends, family, coworkers, neighbors, and the community.

The Chamber then revealed that everyone in the community would actually receive an extra day – Leap Day. Occurring once every four years, 2016 was a Leap Year, and the Chamber dubbed February 29th, 2016 #LeapOfKindnessDay. They launched a plan to mobilize the community (and beyond) to do something kind for others.

The Chamber announced the #LeapOfKindnessDay program before a crowd of 700 people at their annual dinner in January. By the time February 29th arrived, hundreds of people and dozens of organizations had committed to extending goodwill and generosity to deserving people and organizations.

The Chamber website was loaded with ideas and suggestions for things to do to celebrate #LeapOfKindnessDay, including ways to say thank you, give a gift, make contributions, or lend a helping hand.

The surprising result was not that thousands of people and organizations benefitted from the program – the Chamber knew their community would make that happen – it was the fact that nearly 50 Chambers of Commerce also celebrated #LeapOfKindnessDay. The program was hash tagged in social media posts from Chambers around the U.S. as well as India, Italy, Mexico, and Singapore.

“In Saratoga County, Leap of Kindness Day was celebrated by dozens of organizations and hundreds of people who did something kind for someone else. It united our community in a way that made everyone feel special, shining a light on the Chamber’s capacity to bring people together to do great things,” shared Todd Shimkus, Chamber President.

Helping everyone from nursing home residents to school bus drivers, local police and firefighters to veterans and nonprofit organizations, the Saratoga County Chamber took a leap and made a difference.

See all 5 award-winning chamber program and event ideas
in Chambers of Inspiration, Vol. 3.